PIWA’s Lobby Day on the Hill

PIWA’s Lobby Day on the Hill

PIWA's President Barry Walfish, Past-President Gary Hollederer and Director Eric Keller, along with PIWA legislative counsel Bob Pastel had a long and productive day on the hill in Albany on May 15, 2017. PIWA representatives had a chance to meet with the chairs and ranking members of the Senate and Assembly Insurance Committees, the Chair of the Senate Health Committee, bill sponsors of legislation PIWA supports, various key legislative staff, and the Deputy Superintendent and Special Counsel for Legislative and Regulatory Affairs. Walfish also attended a fundraiser for Senator Breslin, and the group joined ELANY for its annual legislative reception at the Fort Orange Club.

PIWA representatives promoted PIWA's members contributions to New York's economy providing specialty markets for New York retail producers. In 2016, wholesalers accounted for 265,000 excess line transactions with a NY premium of $2.276 billion. PIWA members account for about the same in the admitted market. This translates to $160 million in taxes, and 200 offices throughout New York State.

PIWA's legislative agenda includes supporting legislation which would allow physicians and dentists to high quality medical malpractice insurance companies. A.29 by Assemblyman Cahill and S.422 by Senator Seward. Under current law, excess line producers cannot place hospital, physician or dentist malpractice insurance in the non-admitted market unless they receive a declination from the state’s medical malpractice residual market. By definition, a residual market does not issue declinations. As a result, these health care providers either must physically leave the state to obtain coverage, obtain unsuitable coverage from the residual market, or potentially from thinly capitalized Risk Retention Groups. PIWA members also met with the Senate sponsor of legislation to require only admitted paper. He was receptive to our concerns about his bill. The concern is to provide a soft landing for insureds who currently are insured from an entity whose liabilities appear to outstrip its surplus. He was aware of concerns about Risk Retention Groups, but was unaware of the declination requirement. On the Assembly side, Assembly Insurance Committee Chair Cahill suggested that perhaps to overcome the DFS's opposition, there could be “passive declination”, that is after some period of time, if there is no response, that lack of response could be treated as a declination under the purposes of the law.

The agenda also includes support of insurability of punitive damages. A.4743 by Assemblyman Brindisi, S.423 by Senator Seward. We met with the Assembly bill sponsor who would like to address concerns that allowing for punitive damages may encourage some culpable conduct. Assemblyman Brindisi is also working with the Assembly Judiciary committee; which Assemblyman Cahill is also deferring to. The regular insurance industry is divided on this, at least one national trade is opposed to the legislation. There is much work to be done on this legislation too.

We also met in support of allowing continuing education credits for being active members of professional producer associations such as PIWA, including attending at least once a year an educational meeting. A. 7012 by Assemblywoman Hunter and S.3960 by Senator Seward. This is a new introduction, there are other bills which are seeking to make the licensing process more efficient.

Save the date! PIWA summer reception at the Biergarten will be held on Thursday, August 10th. Details and registration coming soon. 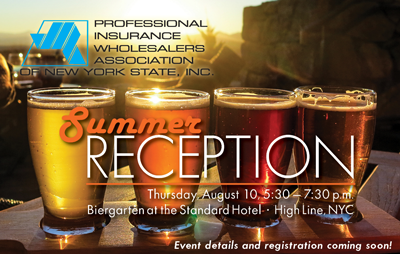 Milton Thurm, a well-known attorney and distinguished expert in all phases of insurance law practice and litigation, passed away recently at the age of 82. Many veterans of the industry knew Milt for these skills as well as approachability and his wise counsel. "Don't do anything until we talk to Milt", was a frequent industry refrain.

Long hours and hard work did not diminish Milt's devotion to the many other priorities he held dear. His family, wife Phyllis of 59 years, three very successful children, seven grandchildren, his friends, his colleagues and the communities in which he lived all received his attention, careful guidance and advice. He was tremendously generous with his time.

Milt was the President of Temple Israel in South Merrick for a number of years as well as a Village judge in North Hills and Great Neck. Perhaps the only thing he hadn't quite mastered in his life was retirement. He continued to mediate commercial disputes in Florida until shortly before his death.

I knew Milt first as a friend of my father and later he employed me as a rookie lawyer (God bless him!) But it was after my father's death when my relationship with Milt could have faded; instead it grew stronger. Family dinners with Milt and Phyllis, my brother Mark and our spouses became the norm. Milt and Phyllis flew in from Florida just to attend a birthday party for my Mom's 70th. Milt took a keen interest in my children. We were friends for three generations.

Milt had a great sense of humor. He spoke of a case where his client was not a white knight. He reported dutifully to his client, that the jury came back, the jurors had requited themselves well rendering a just and fair verdict. Milt had won but feigned a loss and told the client, "I wasn’t looking for justice, I wanted to win! Let's appeal!"

When I think of him, I'll try to remember his wit and enjoy fond memories.