The Professional Insurance Wholesalers of New York State held its Annual Recognition Dinner, Nov. 5, 2014, at Battery Gardens in New York City. The event was well attended and proved to be an excellent networking opportunity for all.

PIWA's Legislative Representative, Bob Pastel and ELANY Executive Director Dan Maher, Esq., provided an update on regulatory and legislative issues affecting the wholesale community in New York State, as well as the results of the election and the effect it may have during the upcoming legislative session.

Additionally, the administrator of the newly established PIWA Hotline, Milton Thurm, Esq. gave the keynote address, which focused on some of the complex issues faced by the wholesale community every day, such as certificate of insurance requests, the "claim chain" and confidentiality issues; as well as practical guidance on how to handle them effectively to minimize E&O exposure.  "Milt's decades of experience and knowledge of the industry make him a unique resource for PIWA members," stated President Maya Cruz in her introduction.

The board elected its officers for the coming year as follows:

The membership also elected the following slate of directors:

The next order of business was the presentation of the Abe Snyder Memorial Scholarship by past President Lucas Snyder. "This is the 11th anniversary of the scholarship and PIWA is proud to have awarded $25,000 since its inception," noted Snyder. "For those of you who did not know my father, Abe encouraged the youth of today to pursue educational opportunities that would enable them to become successful leaders in the insurance field. He was a dedicated member and president of PIWA, and a staunch supporter of PIWA's mission and its members." 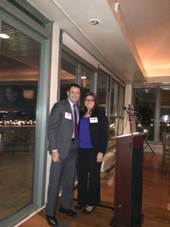 Snyder announced that Brittany de Frias, a senior majoring in risk management and insurance at St. John's University was selected as the winner of the 2014 scholarship. Ms. De Frias has already held several different positions and internships in the insurance industry and she is currently employed by Bank of New York Mellon in their Global Client Management Group.  She has also already begun the examination process for the CPCU and the ARM designations. De Frias expressed sincere gratitude for the generosity of the PIWA membership for this award. 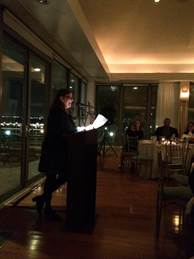 President Maya Cruz thanked the membership and focused on the goals of the association and the outlook for the coming year. "As the only association that represents New York's wholesalers and the wholesale insurance community, we recognize that we play an important role in the areas of legislative representation, education and information."

She then thanked all of the company sponsors for their ongoing support and encouraged everyone to continue to support PIWA.