November 3, 2011
PIWA Annual Recognition Dinner wrap-up
Annual Meeting report
PIWA's 2011 Annual Recognition Dinner opened with the association's annual membership meeting, at which new directors and those with expiring terms were elected to the board. Congratulations to the 2011 Class of Directors :
Michael DeFeo, NIF Group
Eric Keller, HR Keller
Jo Ann Peri, Cowles and Connell of NY Inc.
David Pietrowski, LoVullo Associates Inc.
Tony Sidoni, Walker Group
Barry Walfish, Jimcor Agencies
The newly-elected board of directors then elected its officers for the coming year. Congratulations to:
President - Jo Ann Peri, Cowles and Connell of NY Inc
Vice President - Maya Cruz, RPS-CESI
Treasurer - Barry Walfish, Jimcor Agencies
Secretary - Gary Hollederer, Russell Bond & Co., Inc.
Thanks to Lucas Snyder!
Outgoing PIWA President Lucas Snyder was recognized by the association during the dinner for his efforts on behalf of the organization as its president for the last two years. Newly-elected PIWA President Jo Ann Peri thanked Lucas for his outstanding service and presented him with a plaque in recognition of his service. 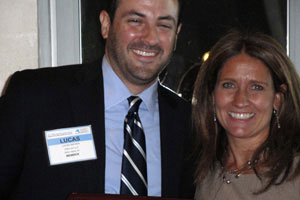 President Peri focuses on future goals
Newly-elected Jo Ann Peri touched on some of the association's goals:
"As the only association which represents New York's wholesalers and the wholesale insurance community, we recognize that we play an important role in the areas of legislative representation, education, and information.

"Our board is committed to making our association better than ever. We are committed to providing quality events such as this one and our Spring Fling, which got rave reviews from participants in May. "
"We want to hear from you. If you have a recommendation on a program or activity that you feel will be beneficial to PIWA and our members, let us know. If you know of a wholesaler or a wholesale carrier who isn't a member of our association, ask them why and encourage them to join."

Thanks to our event sponsors!

Legislative/regulatory update
PIWA legislative representative Bob Pastel and ELANY Executive Dan Maher provided a review of the 2011 legislative session and discussion of the issues expected to be addressed during 2012.
2011 was marked by the installation of Governor Andrew Cuomo. Pastel cited that Cuomo held the line on taxes, made structural changes to reduce the cost of government and held the line on expenses, and consolidated the regulation of financial services.
The newly-combined Department, now known as the Department of Financial Services (DFS), was officially launched on Oct. 3 and is lead by Benjamin Lawsky. Former New York State Insurance Department deputy superintendent and general counsel Robert Easton returned to state service on Oct. 17 as the new executive deputy superintendent of the Department of Financial Services, Insurance Division.  Jean Marie Cho was appointed the Deputy Superintendent in charge of Property. The chief examiner position is currently vacant with the retirement of Eugene Bienski.

For the wholesaler, the speakers cautioned about statutory changes which provide for the doubling of fines and the extension of the authority of DFS to fine for regulatory violations.
ELANY and the industry were successful in prevailing on the legislature and Governor's office to prevent adoption of the bureaucratic NIMA approach to the implementation of the NRRA provisions. However, there will be issues as the various NIMA states, Slimpact states and non-compacting states such as New York, try to reconcile the new provisions.
Wholesalers' attention should be to the duty of due care under section 2118 of the Insurance Law, and the implementation of Regulation 41 changes. The duty remains on the excess line broker to ensure due care in placing with non-admitted companies, especially with those companies that do not provide the financial information to ELANY.

The 14th amendment to Regulation 41, issued on an emergency basis, effective Oct. 19, 2011, was previously issued in July to implement the NRRA. Click here for the citation: http://www.dfs.ny.gov/insurance/r_emergy/pdf/re41t.pdf
In 2012, issues of district reapportionment, high volume hydro-fracking, bed bug liability, cyber bullying and certificates of insurance will be discussed in the legislature. Maher also mentioned the creation of domestic surplus lines companies by some states and suggested consideration of the idea in New York.
Abe Snyder memorial scholarship
In keeping with PIWA tradition, outgoing President and PIWA Scholarship Committee chair Lucas Snyder presented the association's annual Abe Snyder Memorial Scholarship to Kaitlin Graf, a senior majoring in Risk Management and Insurance at St. Johns University.
In accepting her scholarship check, Graf said: "I am excited to be part of the upcoming generation that is learning how to prevent unforeseeable risks and managing unfortunate losses. I am an eager apprentice waiting to contribute to the future of risk. Thank you to all of you who have invested your resources in my future and for supporting my career aspirations in this dynamic industry." 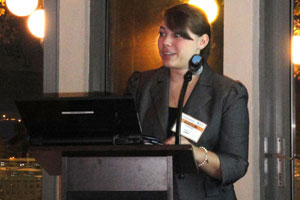 Industry outlook from III
Dr. Steven Weisbart, CLU, Senior Economist at the Insurance Information Institute, presented an informative and interesting keynote address on the state of the industry and its financial underpinnings, as well as look at potential market changes in the coming year. 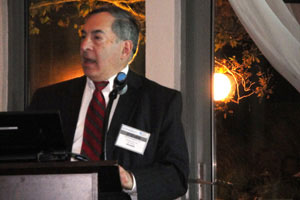 Citing the many recent catastrophic events our country has faced-both manmade economic crises and natural disasters--Weisbart focused on the impact these events have had or will have on our industry and the marketplace.
How significant were this year's catastrophes? Weisbart explained:
Dr. Weisbart concluded by stating that while all of the criteria necessary for a market turn have not yet been met, the industry is closer than it has been in many years to the next hard market cycle.